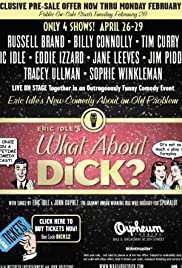 Monty Python’s Eric Idle.  Last night I turned on Netflix just because.  I had in my list a program call What about Dick?  I did not realize that Eric Idle had written the script, co-wrote all the songs and directed this program.  I was all in.

Who is Eric Idle?

Long time Monty Python Fans know Eric Idle.  He was a founding member of arguably the greatest comedy team in the history of sketch comedy. If Monty Python never existed shows very few of the comedy shows you know may have never existed. Here is a link listing the 40 greatest sketch comedy shows of all time. https://www.rollingstone.com/tv/tv-lists/40-greatest-sketch-comedy-tv-shows-of-all-time-142581/funny-or-die-presents-2010-2011-186812/ .  Eric Idle wrote and sang all the songs for Monthy Python and their movies.  The reson given by his cast members is he was the only one who could carry a tune.

I do not want to give too much away as to not spoil the fun of watching.  This movie begins with the birth of a sex toy invented in Shagistan in 1898 by Deepak Obi Ben Kingsley (Eddie Izzard), and tells the story of the subsequent decline of the British Empire as seen through the eyes of a Piano (Eric Idle).  Link to full summary – https://www.imdb.com/title/tt2520808/plotsummary?ref_=tt_ov_pl

The cast is what makes this entire absurd thing work.  Here is a list of the cast.

If you are a fan of comedy this will make you laugh out loud.  This is a great way to spend 90 minutes forgetting about your day.

If you are interested in English humor and Monty Python in particular Netflix has the entire original series and all of the Monty Python movies.  After watching one or all of these you will never be wondering why people are laughing when they hear “now for something completely different” or “it’s just a flesh wound.”  You can laugh knowingly with everyone else. Monty Python’s Eric Idle